You are here:
BlogMusic Monday 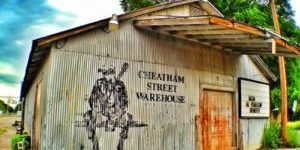 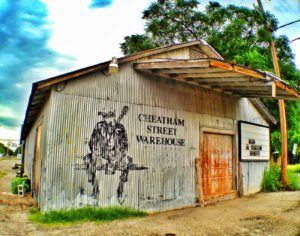 Did you know one of the best Texas music venues is right here in San Marcos? Instead of driving to San Antonio or Austin, head to the iconic Cheatham Street Warehouse. More than 100 years old, this institution is the place to go listen to live music in San Marcos.

The Birth of a Foundation and Songwriter Circle

To Kent Finlay, Cheatham Street Warehouse was a place for creation. It’s where songs are born, molded, and grown. It was also where the Cheatham Street Music Foundation started. This nonprofit carries on Finlay’s legacy in developing, promoting, and preserving Texas music. According to Cheatham Music Street Foundation’s website, its goal is to “advance education in songwriting through songwriting classes, workshops, seminars, public forums, panels, lectures, and concerts.”

You can see this nonprofit’s goal come to life by catching one of Kent Finlay’s Songwriter Circles on Wednesday nights. Talented musicians from around Central Texas appear at this weekly event to perform their original songs. You never know who might show up to play. It was the Songwriter Circle that compelled Finlay to keep the music venue open.

The Cheatham Street Warehouse briefly changed owners in 1983, but soon found its way back in Finlay’s loving arms. His three children all made their professional debuts there in the ’80s.

Folks visit this laid-back music venue to hear progressive country music. The cool thing about this type of music is that consists of a little traditional country, folk, rock, and blues. No matter your taste in music, Cheatham has something for just about everyone. It’s just a matter of watching for the right performer.

Opened in 1974, this historic honky-tonk has a rich history. Before becoming a recognized name, Stevie Ray Vaughan played at Cheatham every week. The voices of George Strait and Willie Nelson have graced the walls of this institution. It was also the springboard for Ace in the Hole, Terri Hendrix, Hal Ketchum, and many more.

Finlay passed away in 2015, so his children took over ownership until Randy Rogers bought the music venue in 2016. The family couldn’t have asked for a better person to take it over. This place is special to Rogers as he signed his record deal on Cheatham’s stage, the place that launched his music career.

What’s cool is that Randy Rogers Band’s major label debut features Kent Finlay’s “They Call It the Hill Country.” Rogers continues to make regular appearances at the Warehouse. Come on down to the Warehouse. It’ll be a night to remember.

If you buy a new home in TRACE, you’re only a 10-minute drive from hearing live music in San Marcos at one of the best music venues in the state of Texas. TRACE features modern homes starting from the $190s. The two hand-selected award-winning San Marcos homebuilders, Buffington Homes and Pacesetter Homes, will build you a home that you love.