5 Fun Things to Do in Gruene 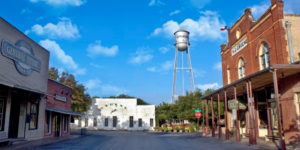 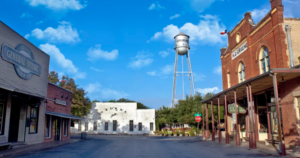 When people first learn about Gruene, a historic district in New Braunels, most folks think it’s pronounced groon, grew-een, or grew-in. And maybe even “grew-nee.” Bet you’ll never guess how it’s really pronounced. Even many native Texans get it wrong!

This place is as intriguing as its name and it’s only 20 minutes from San Marcos and 10 minutes from the Schlitterbahn Waterpark. Gruene is also on the National Register of Historic Places as many of the buildings that were established in the 1800s or early 1900s still stand today. And they’re actually some of the places you’ll want to visit on a Hill Country vacation.

Here are the five places to go in Gruene, a great day trip destination.

Built in 1878 as a mercantile store, this popular attraction has all the things you expect to find in a general store. Think of it as a smaller, old-timey version of Buc-ee’s.

The outside of Gruene General Store looks exactly as you would expect with the square style storefront in weathered wood and wooden flooring on the inside sprinkled with license plates. There, you can get homemade fudge, salsas, country style preserves, and honey butter. Of course, plenty of souvenirs are on hand and even cowboy hats.

If you want to see what a 19th-century cottage looks like, you’ll want to add Gruene Haus to your list of stops. Built in the 1880s for the foreman of Henry D. Gruene’s farm, Gruene Haus features board-and-batten siding and an inset front porch with milled brackets. Recorded as a Texas Historic Landmark in 1987, this place sells antiques, gifts, apparels, and shabby chic décor.

Since 1878, Gruene Hall has been the central place for everyone in the community to go for entertainment and socializing. Originally a dance hall and saloon, this 6,000-square-foot building is where folks go for live music. Dancing is still happening there as they hold swing dance lessons. Working songwriters try out their material or just come play in between music dates.

Music icons like Jerry Lee Lewis, Merle Haggard, Kris Kristofferson and Little Richard all played here. Dixie Chicks, Garth Bricks, and Chris Isaak stopped by as they were coming up in the music world. Long after establishing their careers, Aaron Neville and Willie Nelson appeared in the hall. Upcoming performers include Wynonna, Three Dog Night, and Maren Morris.

Overlooking the Guadalupe River, the Gristmill Restaurant and Bar opened in 1977 as a homage to the original Gruene cotton gin that was destroyed by a fire in 1922. All that remained of the water-powered mill was a three-story brick broiler room, which is now the restaurant that serves steaks, burgers, and South Texas fare. They also have the River Grove, an open-air patio sheltered by a grove of trees and provides a great view of the river.

The Gristmill has served many celebrities so you never know who you will see. You can also catch live music performances by artists like Pat Green, Smashing Pumpkins, and Lyle Lovett. Word is they’re famous for their Gruene Bros. “Best” Wurst made with Polish Wedding Sausage from Falls City, Texas, with Gristmill BBQ sauce. Hungry, yet?

Have you heard it on the grapevine? Wine lovers and vineyard adventurers will want to visit the Grapevine tasting room and bar stocked with Texas and international wines and Texas craft beers. You can enjoy your glass in the outdoor garden or on the front porch with its scenic views. If you time it right, you can also listen to live tunes in the garden.

They serve cheese and sausage plates and sell wine accessories and décor. On the third Thursday of every month except January, the Grapevine’s “Come and Taste It” event offers complimentary tastings, live music, and three prizes. At this monthly event, you’ll sample wines from a featured Texas winery and staff-selected brews.

Taking a Hill Country vacation to Gruene is a breeze when you live in TRACE. This modern community in San Marcos offers many amenities, such as an on-site elementary school, several parks, picnic areas, athletic fields, and a planned retail space. You’ll have access to everyday things right in the community and the adventures to this day trip destination and other places are only minutes away.