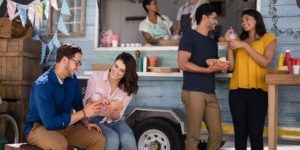 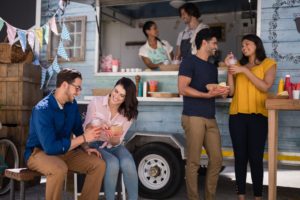 Would you believe the gourmet food truck industry started only 10 years ago? Apparently, it began with the traditional taco truck and morphed from there. While Austin may be known as the Food Truck Capital of Texas, the food truck scene in San Marcos is quickly growing!

San Marcos is a great spot for the food truck industry as the weather rarely dips below freezing. Remember they’re always moving, so check their social media or websites to find out where they’ll be stationed. A lot of them show up on Guadalupe St. so it may be worth driving by to see who has set up shop there!

One place you can go to find the best San Marcos food trucks is the Junction (200 Farm to Market 32
San Marcos, TX 78666), a food truck park with a beer and wine garden. It’s off Ranch Road 12 and Farm to Market 32, just outside Wimberley and a short drive from TRACE in San Marcos.

Folks can bring their leashed pets and the kids can play on the playscape. If you come on the right day, you might just catch some live music. Visit their website for upcoming musicians and events like the crawfish boil.

Get your Mexican food fix at El Taco Feliz 2 where customers have raved about their breakfast tacos and affordable prices. One customer says he’s been working through the menu and everything has been delicious including the nachos, quesadillas, and enchiladas. Several patrons say the servers are fast and courteous.

St. Pita’s the place to get your Greek fix of gyros and falafel. They even serve fried avocado called the Holy Avocado. Want to try something other than tzatziki sauce? Shake things up with the saintly sauce that packs a punch. St. Pita’s certainly lives up to their slogan, “heavenly good eats!”

One reviewer says you’ll never go back to Taco Bell after you try Santi’s tacos and tortas. The food truck also serves hot Cheetos with cheese. That might raise an eyebrow, but apparently, it’s quite tasty! The loaded fries are served with bistec (seasoned steak), cheese, beans, nacho cheese, and avocado. Even hot dogs get the Mexican treatment.

What’s the other most popular food you can count on in Texas besides Tex-Mex? BBQ, of course. Chunk Deuce BBQ has all kinds of plate options including brisket, chicken, pulled pork, and sausage. The plates include two sides and a drink. You can also find tacos, hot dogs, nachos, and a loaded baked potato on the menu.

On a hot day, what’s better than a cold treat? Rock N’ Dilly’s serves shaved ice, ice cream, and hot foods like nachos, Takis and cheese, and Frito pie. Menu items change and you never know if they have candy apples or a Cheeto Dilly. Their bright-colored treats will brighten your day and cool you down. They even have something called MangoBloom, which is mango sherbet surrounded by cucumbers and dosed with a Mexican sauce.

When you live in a community like TRACE in San Marcos you’re near great shopping and San Marcos food trucks like these. It’s city-living without the crowds, but it’s close enough to big cities like San Antonio and Austin for plenty of adventures and more food trucks to explore.