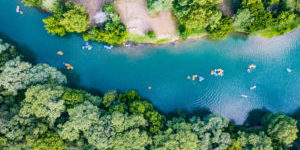 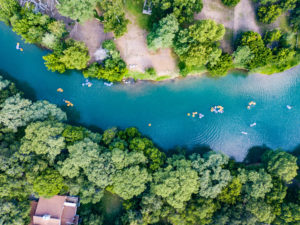 Austin’s boom has led to a few big-city challenges compelling people to look further south for a smaller and more affordable city. One of those cities is San Marcos. Thrillist’s “The Coolest Small Town in Texas Is Building a Better Austin” raves about this city just 30 miles south of Austin.

San Marcos offers everything you can find in Austin in a less crowded setting. Texas State University is an Emerging Research University with a catalog of more than 90 of each bachelor’s and master’s degree programs. The city plans to grow responsibly to ensure traffic keeps moving, places stay affordable, and its overall vibe mixes a little of San Antonio, a little of Austin, and a lot of Hill Country.

For San Marcos residents, San Antonio and Austin are easy day and weekend trips. You get the best of Hill Country living without the high price tag or bumper-to-bumper traffic. What makes the Hill Country special? It could be the colorful wildflowers, wide open spaces, the soft rolling hills, or historic places.

People travel to the big cities for college, water fun, and incredible music. The good news is that all of these are available in San Marcos.

Thrillist states that the median price for a home in Austin is $400k whereas it’s only $267k in San Marcos. For example, the new homes in San Marcos in the TRACE community fall between the $170s and the $260s. You’ll find one- and two-story homes and floorplans from Buffington Homes and Pacesetter Homes ranging from 1,000 to 2,400 sq. ft.

You can count on an unforgettable experience when you go tubing on the San Marcos River. Thrillist calls it one of the greatest rivers in America for tubing. You can float in a tube for one mile on the cool river with underground springs that maintain its 72 degrees year-round. So when it’s a hot, hot day in Texas, the river doesn’t get warm like some swimming pools and lakes do.

You can do other things besides tubing. Kayaking and stand-up paddling are available as are glass-bottom boat tours. For a change of scenery, you can do these activities at Rio Vista Park.

Musicians flock to San Marcos for its affordability and nightlife where you can hear live music at The Marc, Green Parrot, Kiva, Stonewall Warehouse, and Cheatham Street Warehouse. Stevie Ray Vaughan and George Strait started their music careers in this city. Randy Rogers launched his career at Cheatham Music Warehouse and then took over as its owner.

Every year, the city holds SM Fest, an art, music and film festival. The Art League of San Marcos website contains a lot of information about arts events and a list of art galleries. On the second Saturday of the month, from March through December, art lovers head to the Art Squared Arts Market. Visitors can wander the market to browse original artwork and meet the artists. Texas State also has an award-winning fine arts program and showcases student work.

Bargain hunters come from all over Texas and other states just to shop at San Marcos outlet malls. But that’s not all. Its historic Downtown Square features many unique, quirky, one-of-a-kind shops and boutiques. You can even watch artists blow glass and buy their creations made right in Wimberley Glassworks.

Urban Mining Company plans to move its corporate headquarters from Austin to San Marcos. The company states it chose San Marcos because it’s “at the heart of the emerging innovation corridor,” affordable, and contributes to the quality of life. The Greater San Marcos Partnership says that more than 30 companies have relocated or expanded in the city.

Unlike your typical neighborhood, TRACE will have retail and commercial space, an elementary school, and a fire station within the community’s walls. All of these may lead to employment opportunities.